Great St. Bernard Pass (Colle del Gran San Bernardo on the Italian side) is the third highest paved pass in Switzerland, at 2,469 m (8,100 ft). It connects Martigny, Switzerland and Aosta, Italy. Great St. Bernard is one of the oldest mountain passes in the Western Alps, with evidence of continued use since Bronze Age (that 4-5000 years ago!). 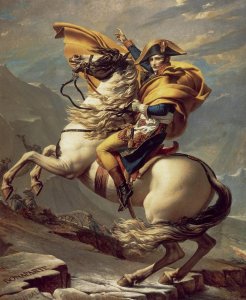 Almost yesterday in comparison (1800), Napoleon plus army (40,000+ strong) used this pass to enter Italy and Lay Down the V Rule V: Harden The Fuck Up . But the trip over the pass reads like a party. From Wikipedia: “During the five days spent traversing the pass, Napoleon’s army consumed almost 22,000 bottles of wine, more than a tonne and a half of cheese, and around 800 kilograms of meat.”

At the top of the pass is the Great St. Bernard Monastery, which was founded by Saint Bernard of Menthon in 1049. The monastery became famous for its use of St. Bernard dogs in rescue operations, hence the name. It is still there.

Don’t bother riding from Sembracher, Switzerland. The road is quite busy and the views on the lower part are not worth the traffic just to “bag” the full climb. At least not for me, and I’m pretty intrepid. But I also ride for the joy of views and relaxation. So if you are like me in that, what you want to do is drive to the bypass tunnel. Most of the car and truck traffic will take the tunnel to Italy, leaving a quiet road with great views for cyclists.

As for parking, there is a defunct ski station at this juncture and there is copious free parking. 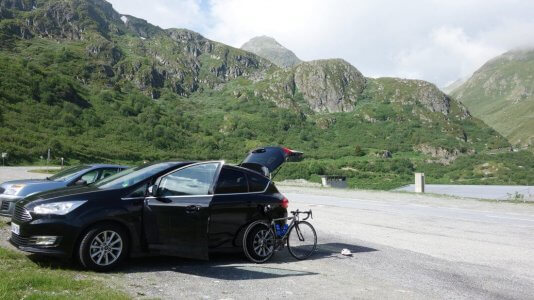 Parking before the tunnel of Great Saint Bernard Pass. Time to ride!

As you ride up you can see evidence of the ancient paths over the pass, and more modern structures such as L’Hospitalet at 4km from the summit. 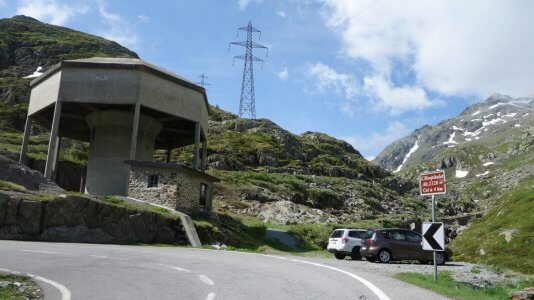 The View from the top back to Switzerland is limited due to the angle of the road and the size of the mountains. The Italian side, however, has the much better views at the top and further down too. And it’s Italy which means the coffee and food is better, and the people are more friendly. I love Italy… 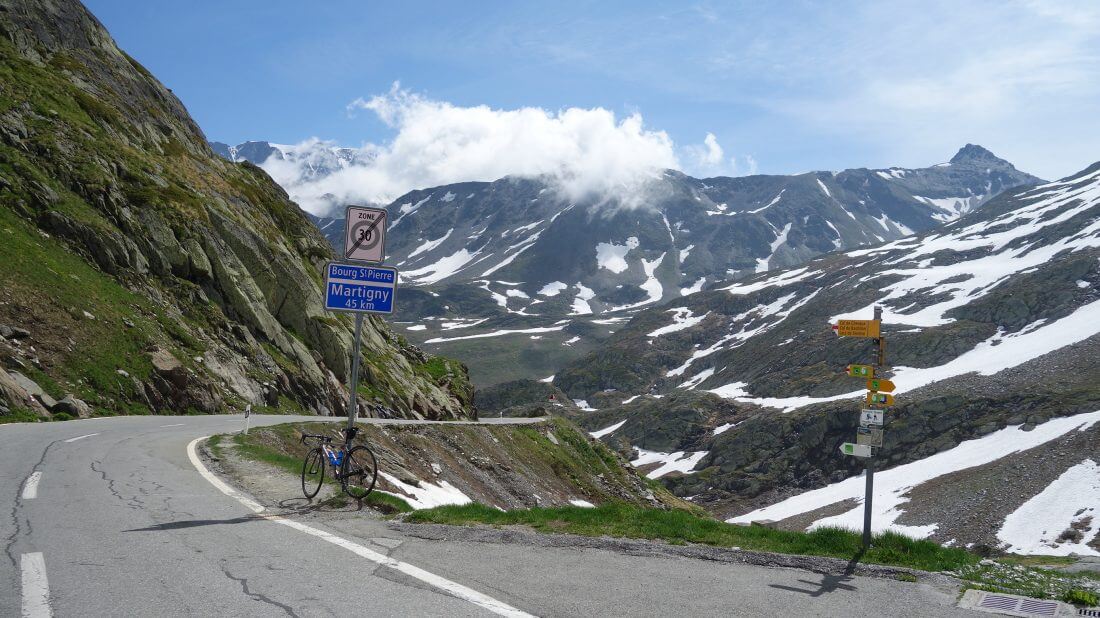 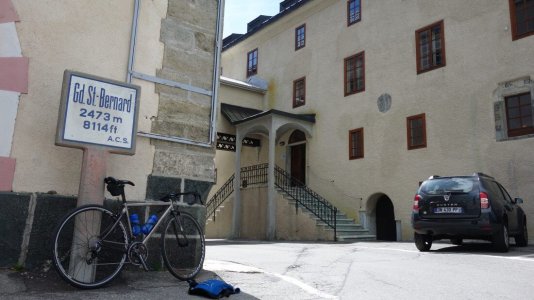 The Ritchey with Great St Bernard Pass sign and hospice 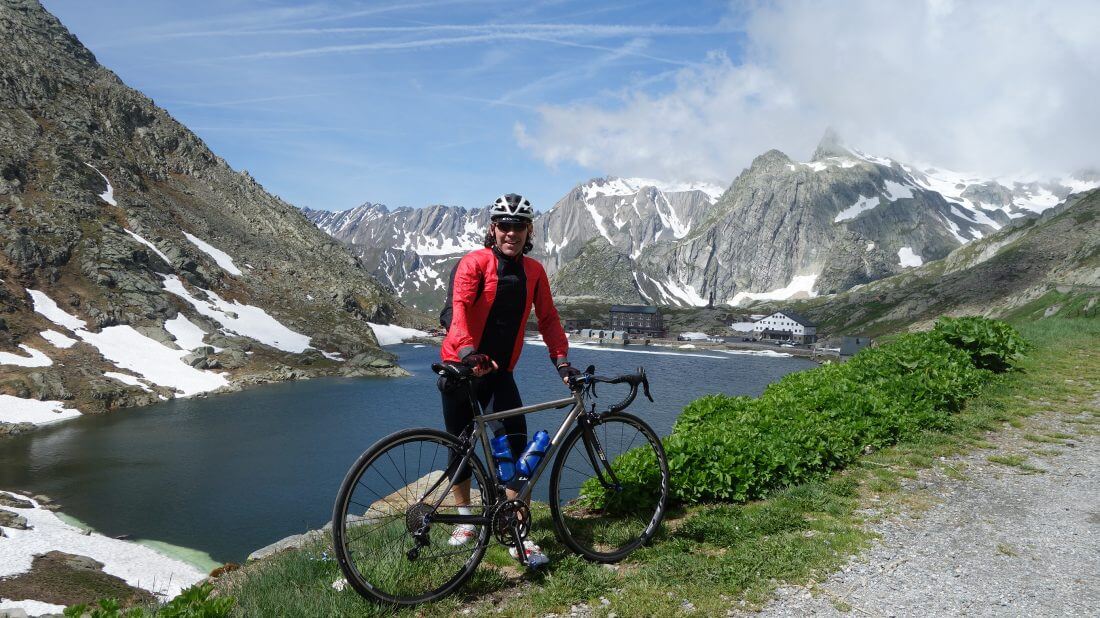 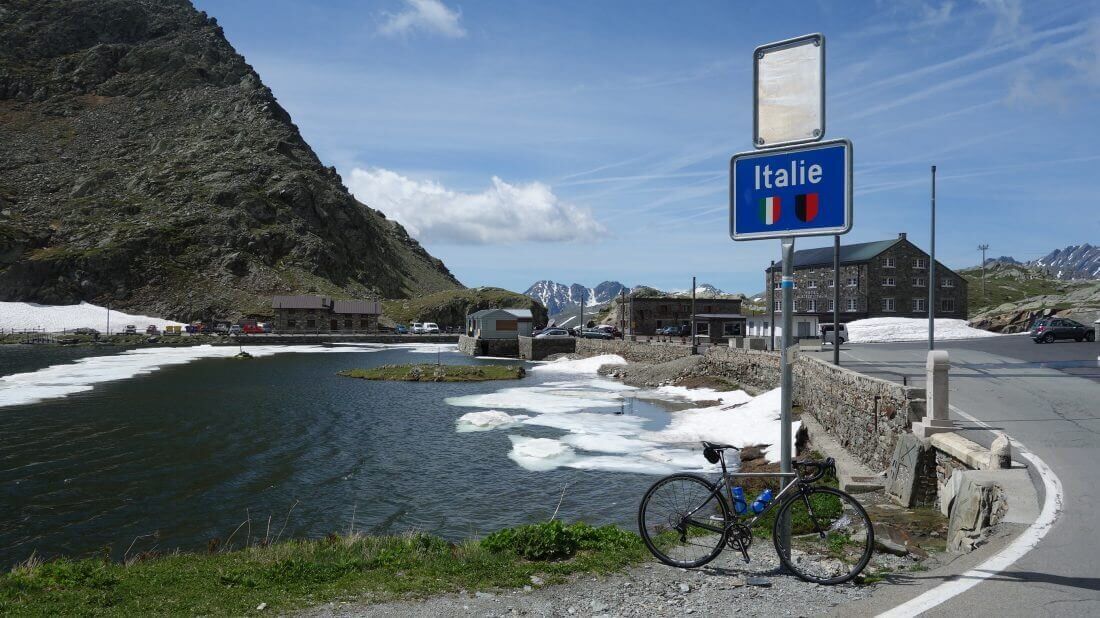 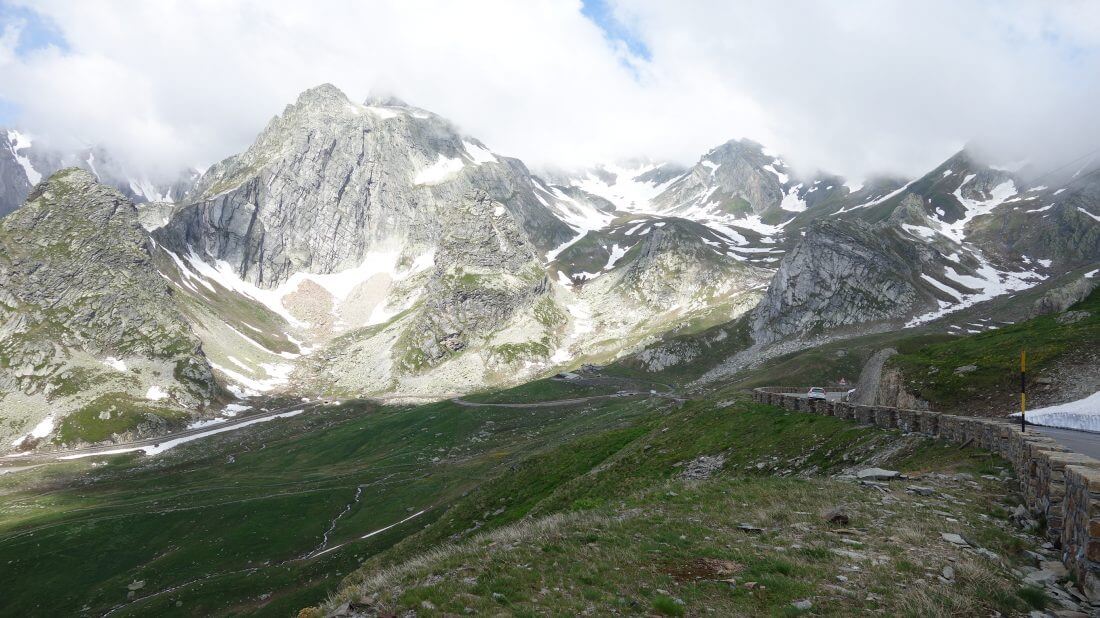 Great St. Bernard Pass near the top on the Italian side. 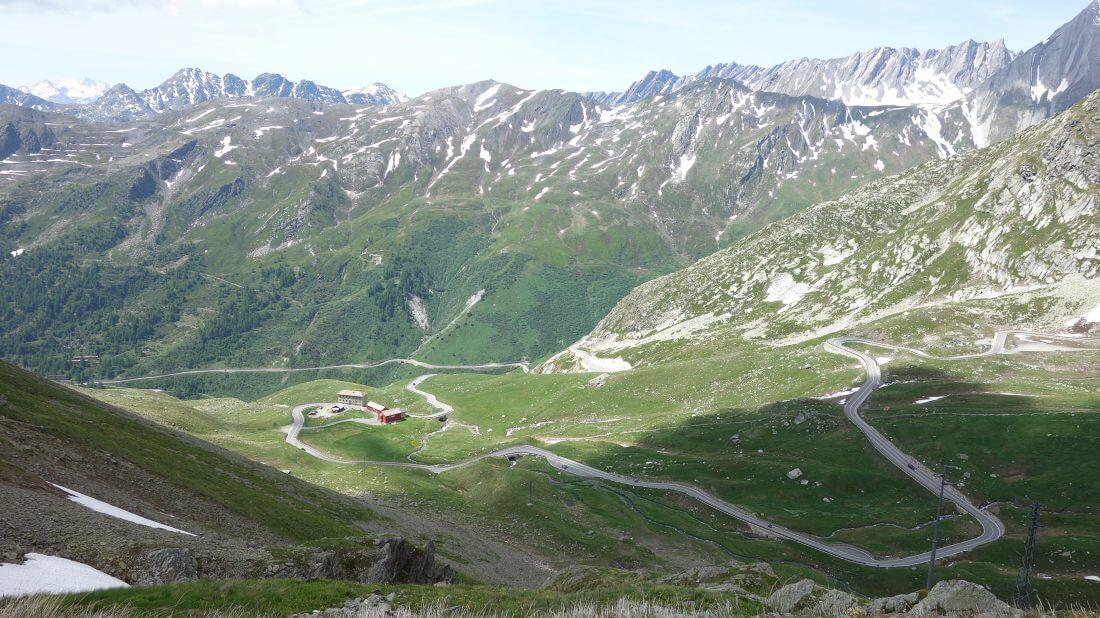 An bit further down the Italian side. 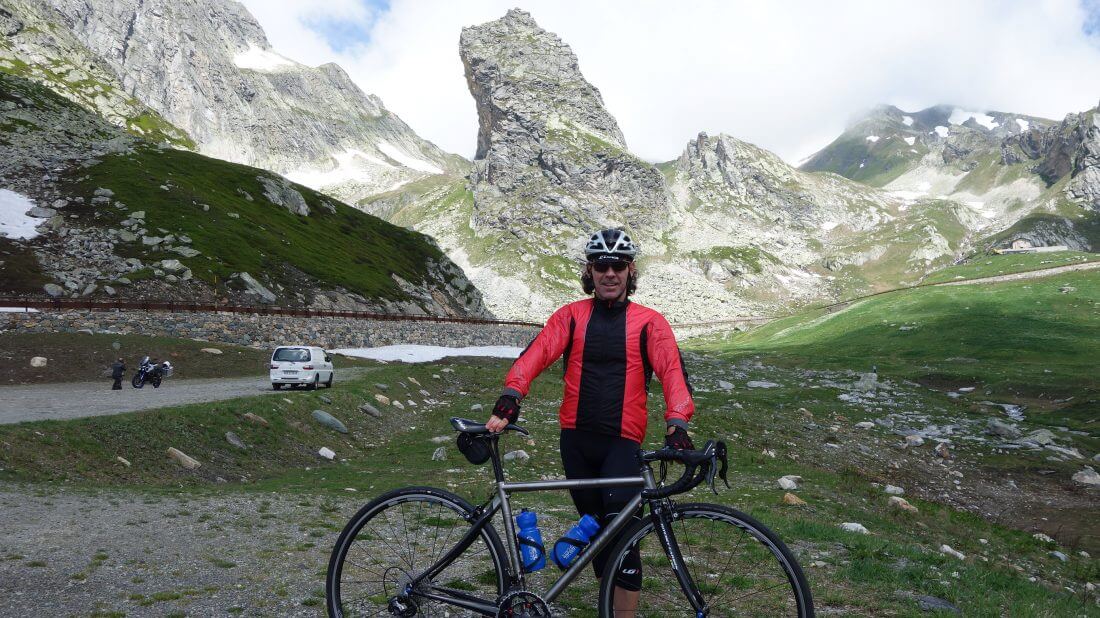 There are some strange and dramatic rock formations on the Italian side of Great Saint Bernard pass, near the top. 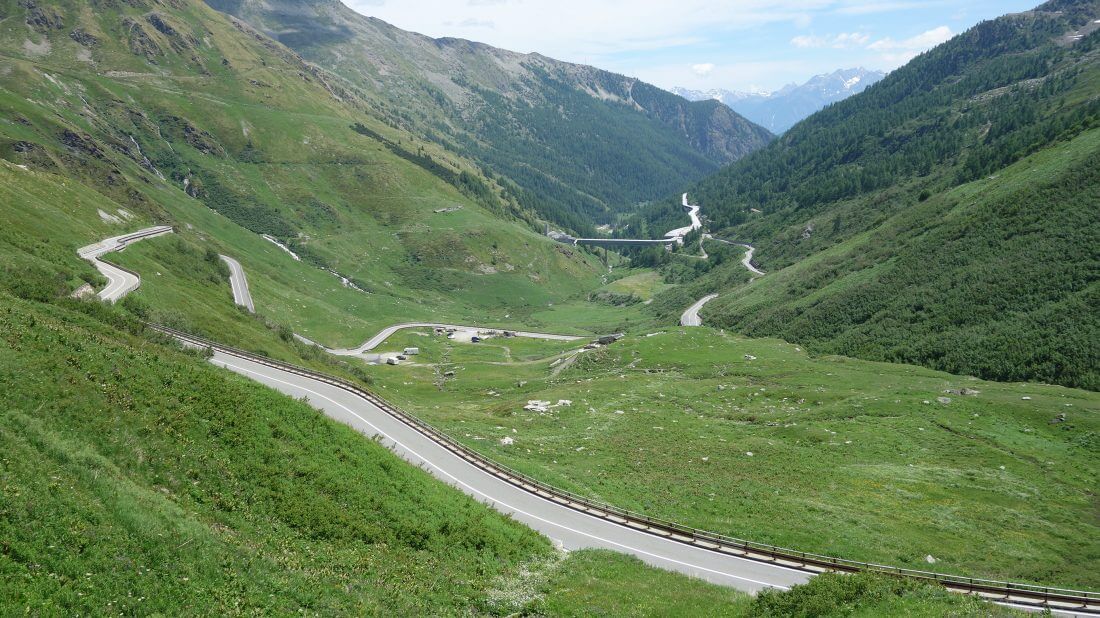 The lower you go on the Italian side the warmer and greener it gets.

Instead of riding all the way down to Aosta I opted to ride up to a little ski station called Arp di Jeu (French – Arp de Jeux). My reasoning was the road to Aosta is pretty heavily traveled by cars and trucks, and there are so many side roads to explore that, to me, it’s not worth bagging the full climb. And the road to Arp di Jeu is perfect in this regard: no traffic, tiny road, quite steep at times, great views. 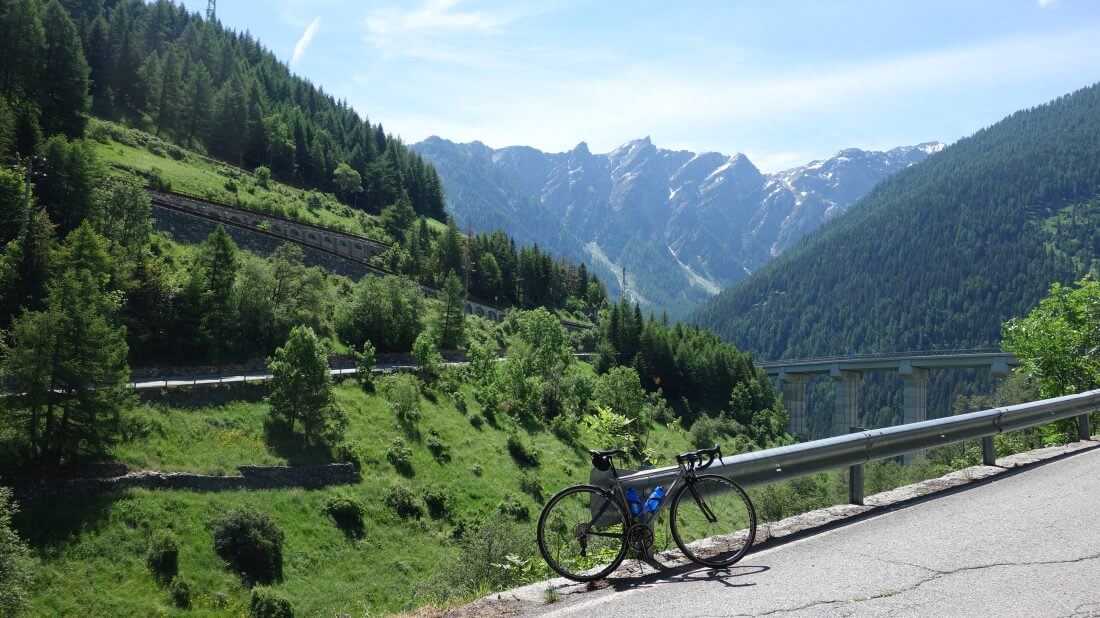 The Ritchey and views just after the turn off to Arp di Jeu.

The Road to Arp di Jeu had great views and zero car traffic. And I was the only cyclist. 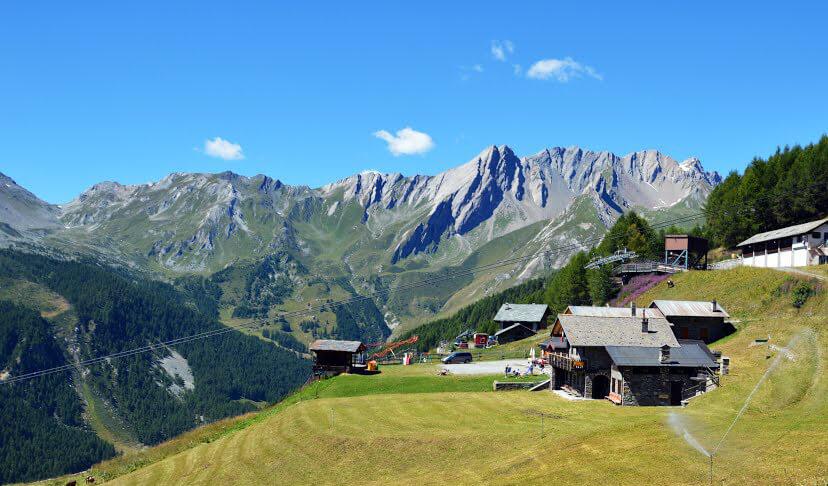 This is the little ski Chalet at Arp di Jeu. There was not much going on there on this warm summer day.

Yes, absolutely this climb is a winner. The Italian side is the best of the two but nothing on this day was long so it’s easy to take your time, do it all, and have plenty left in the legs for the next day. And in my case Sanetesch Pass awaits.