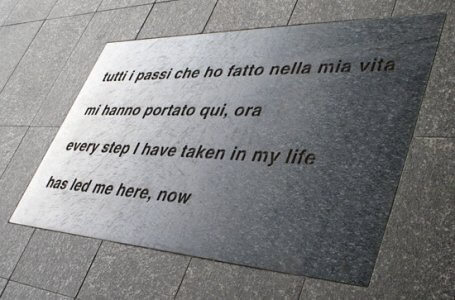 When you land in Milan (MXP), they give you a cheat sheet to the local vibe and ethos in the form of this plaque set into the airport floor.

I rented a small Volvo wagon with great torque and horrible visibility at Milano Malpensa and drove to Arabba, Italy. For the record, I love driving in Italy. It is fast and no nonsense. You use the left lane ONLY for passing. To loiter in the left lane is to get rear ended by a car doing 200kph. They do not slow down because they expect you to get the hell out of the left lane.

Side view of Hotel Al Forte

I spent two weeks at the Hotel Al Forte, which was once a military fort. About the Hotel, from their website:

The “Forte” dates back to 1897 and it is located in the main road of the Dolomites (SS. 48 Dolomites). At the end of the war the building had been partly demolished by grenades of the Italian artillery. However, in great measure the Forte has remained intact thanks to the large walls which compose it (maximum width 1.70 cm). The building has a cubic form and the interior rooms have been preserved as original as possible. On the corners of the central body there are 2 turrets. One of them was destroyed by a grenade while the other one houses the building entrance and, on the upper floor, a romantic restaurant room.

In 1972 Waillant family restored the “Forte” and use it as a restaurant. At the end of the last century Jolanda and Nino Waillant finalized the work building an elegant Hotel connected to the “Forte” through the secret and strategic passage of the Austrian troops. Al Forte Festungshotel is still managed by Waillant family which carries out from generation to generation the hotel tradition with passion.

Why did I pick this place? There were a lot of options in the area so I narrowed my choice by the following factors:

The staff speaks Italian, German, Ladin, English, and perhaps more. When they saw me with my bike they gave me a complimentary box of Hero brand Muesli Energia bars. Essentially granola bars. 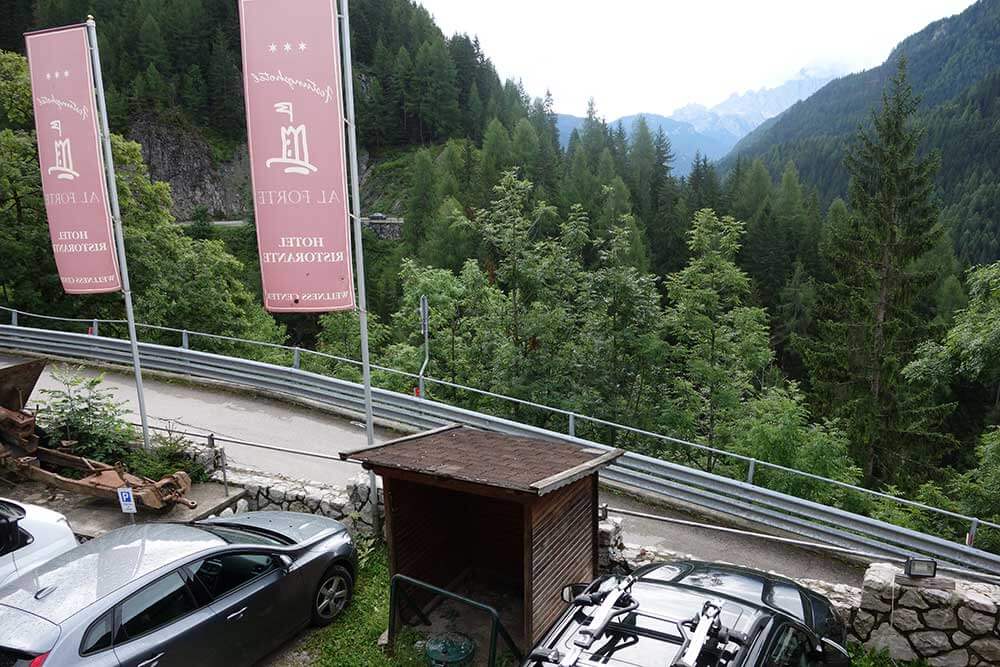 The view out the back of Hotel Al Forte, looking east. This is a deep and steep valley. Nothing is flat and everything is pretty.

The hotel has been rebuilt extensively from damage sustained in WWI.

Mine was a simple affair. Clean, Austrian-ish and with modern bathroom, including a proper shower, which isn’t always the norm in Europe. It had a full bed with down bedding, a desk, a TV with programming in Italian and German.

The only complaint I had was that the internet was fast early in the day and slow later. This was in 2015 and may have improved since then. 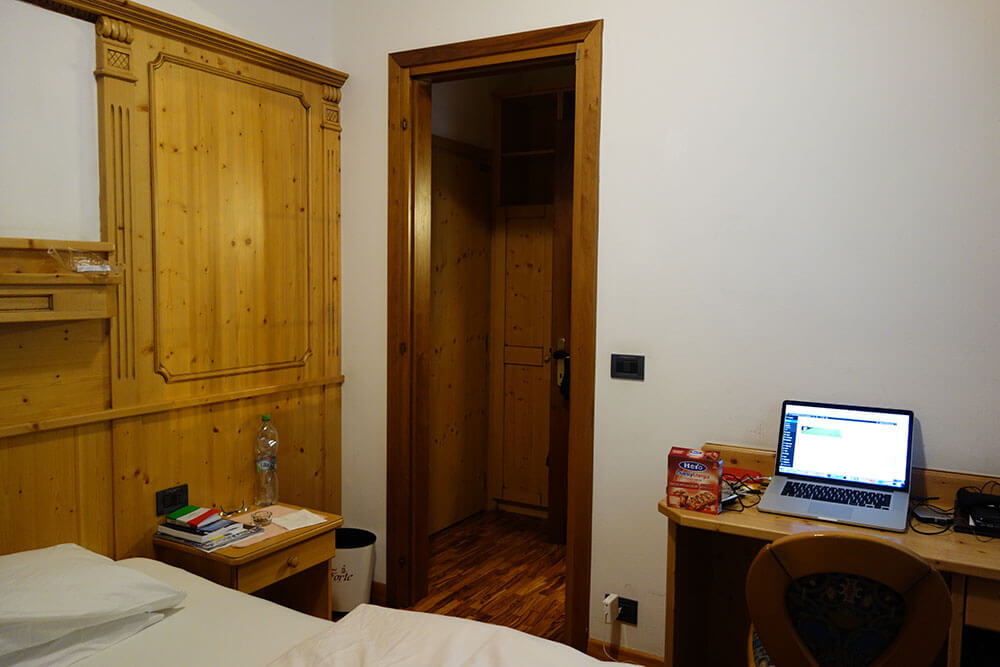 My room and office at Hotel Al Forte. On the desk is the Macbook and the box of muesli bars they gave me. 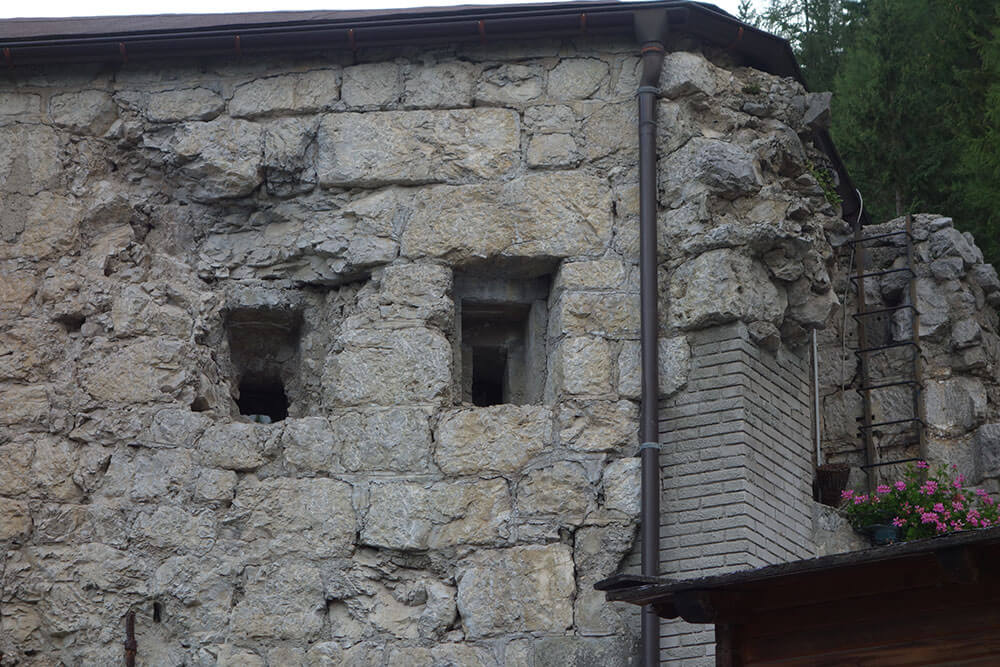 Old gun windows in the back of Hotel Al Forte.

Ascending these ancient stone stairs takes you to the dining room where breakfast and dinner are served. The window at the top of these stairs is the same gun-window in the close up pictured above. The walls are about 2 meters thick of stone.

Breakfast is your standard Euro spread. Some granolas and cereals, yogurts, breads and pastries, honey, butters, oils, jams, meats, and cheeses. They even had eggs and fried meats, which is not always the case in Italy. And of course coffee. We are in Italy.

Dinner has been a mix of Italian, Austrian, and Ladin dishes. We are very north and this territory has deep Austrian roots. The food was very good and quite interesting. The also do a thriving lunch business but I was on my bike most days do didn’t eat lunch there. 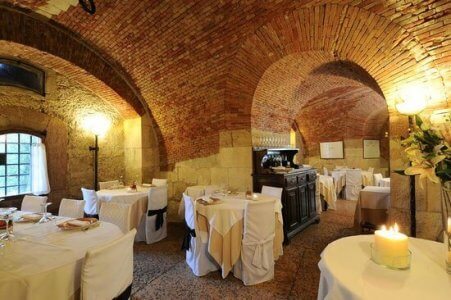 Below are a few pictures taken from little excursion rides I did on off days. There are many little roads to explore branching off the main road through the valley. Most of these side roads are really really steep, like 10-15% plus. Knee wreckers.

These pics are within just a few km of Hotel Al Forte. 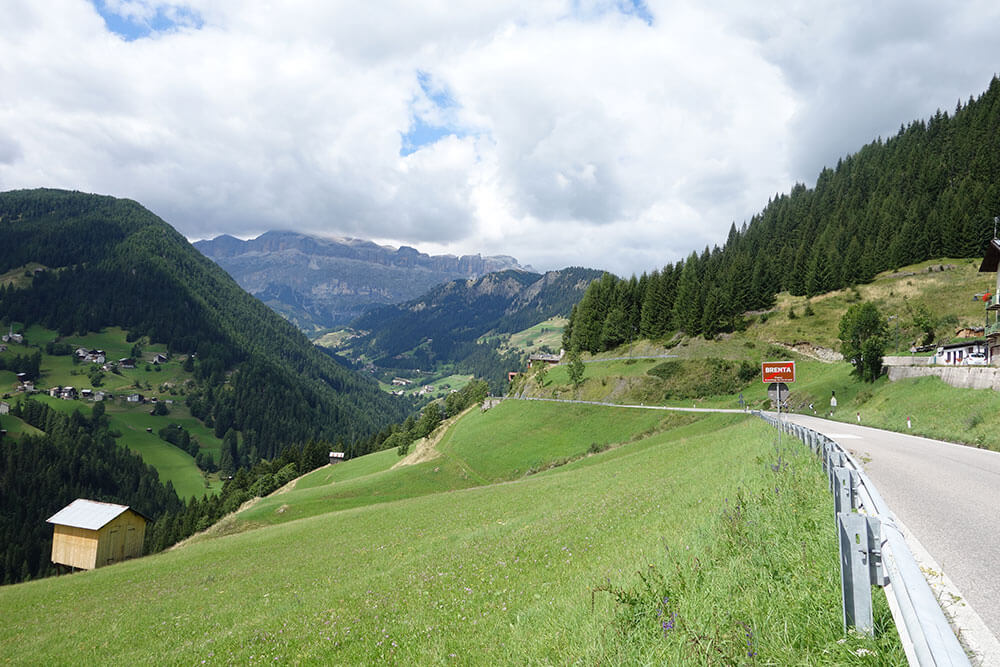 View toward Hotel Al Forte from a couple kilometers to the east of the hotel. You can see the mighty Pordoi in the distance.

There are countless nameless little roads near and to the north of Hotel Al Forte in Arabba Italy. Most climb to a little village or dead end at a farm or trailhead.

Cycling on a little road to nowhere near and to the south of Hotel al Forte in Arabba Italy.

To Stay or Not to Stay

Yes you should consider staying at Hotel Al Forte. I would stay there again because it suits my style of travel perfectly. I like to find a central location for many rides, and Arabba is ideal for that. For expedience and convenience I want a big breakfast, good coffee, and interesting dinner options included. (After riding for 5-8 hours I don’t want to screw around with dining out.) Of course it has to be affordable. I think I paid $1800 (cash discount) for 12 days, meals included, which is a well worth the price of admission to some of the best riding in the world.