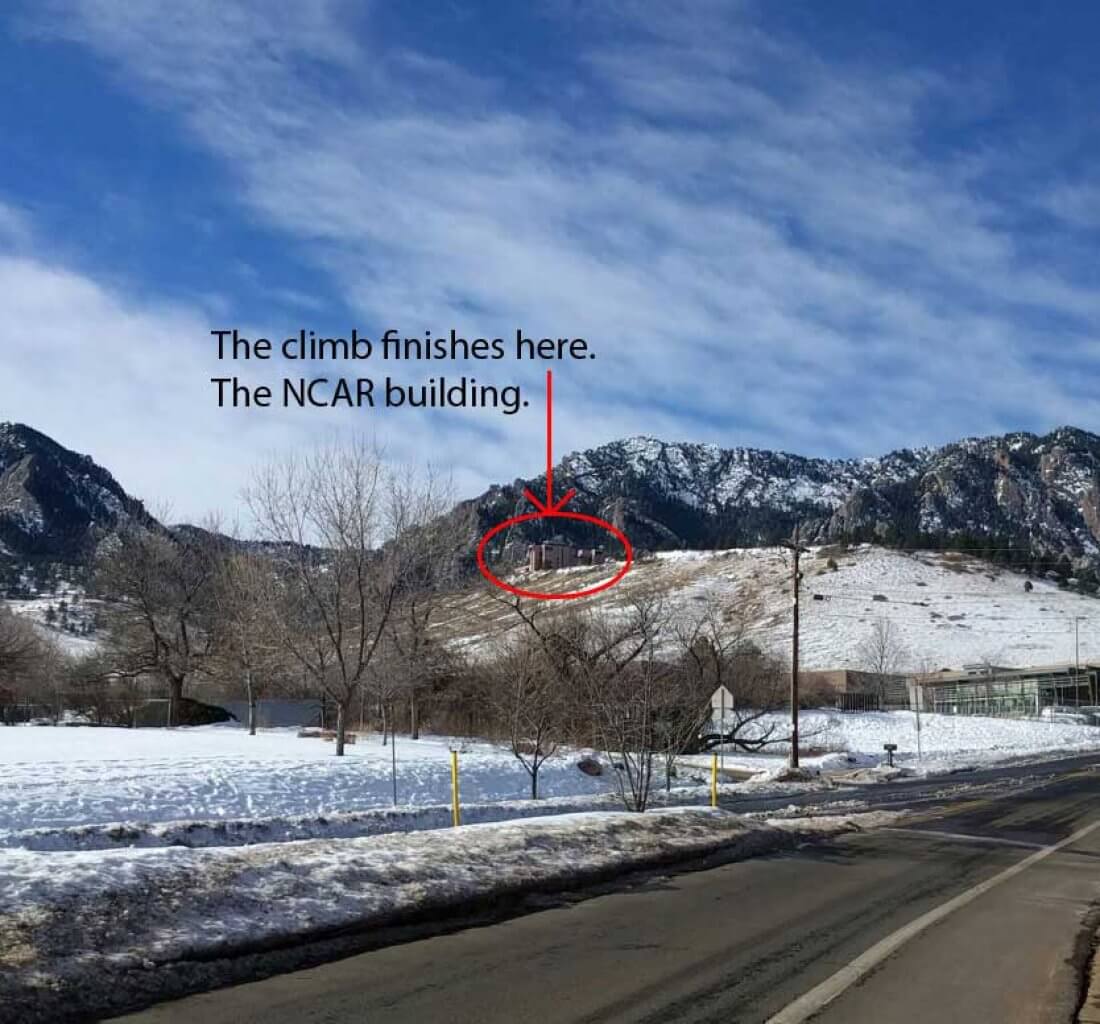 You can see the NCAR complex starting about 1.5 miles from the top. We are still in the residential area at this point, but gradient is about 6% by now.

Today we are going to explore a climb that is little known outside of Boulder. It’s not that long and it’s not very hard; the most trafficked Strava segment is 1.2 Miles at 6.6%. The views are just okay by local standards. It’s an unremarkable climb and easy to overlook, except for two characteristics: Its convenient location in south Boulder and its almost magical warm glow in the winter due to it’s exposed location and orientation to the sun. This same orientation and exposure to the sun, on the other hand, often can make NCAR unbearable midday in the summer.

Boulder received about a foot of snow this week and the majority of the roads in the Boulder area are a mess of slushy snowmelt. NCAR, however, is bone-dry and sunbaked bliss. It was 53 degrees at the bottom and 48 at the top today. This is pretty typical and one of the reasons that Boulder has such a high density of elite athletes. Brutal topography when you want it, but great weather almost always.

The most legit NCAR Strava segment is 1.2 Miles at 6.6% (or 7%, depending upon the Strava view. (Note: I think Strava likes to round up various stats to boost egos and thus a false positive user experience.) 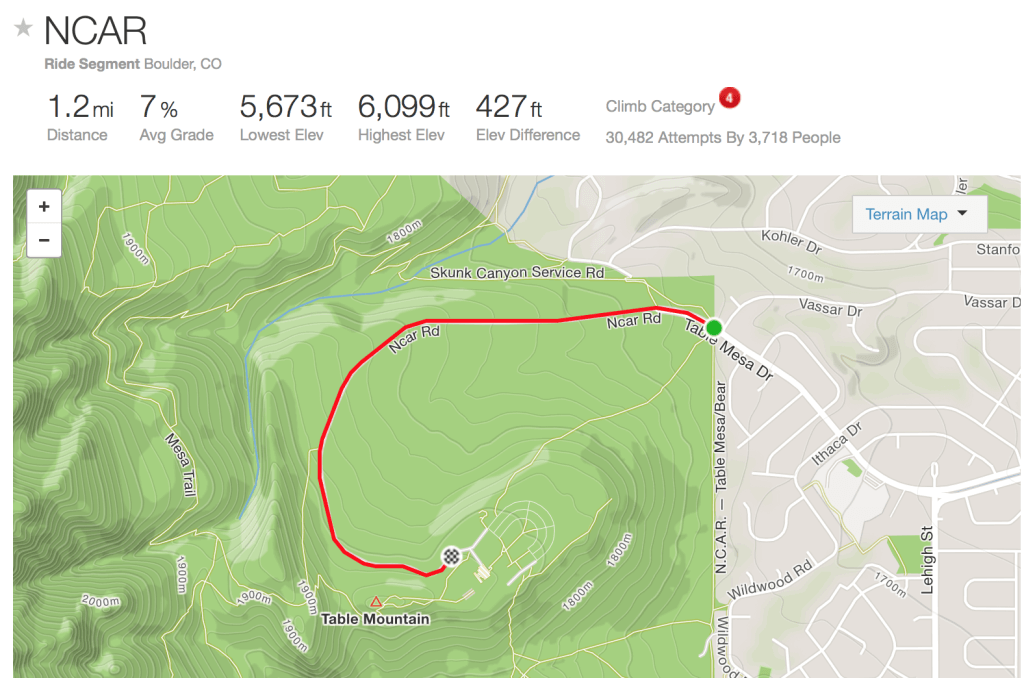 The second  Ted-approved legit Strava segment is the section on which most cyclists do their long NCAR intervals because it’s a little longer of a climb: 1.7 miles at 6%. Peter Stetina holds that Strava record: https://www.strava.com/segments/1074925

By local standards, yes, this is just a hill. But NCAR is a hill with many qualities that make it punch above its weight. In the winter when it’s too cold to do the big stuff, NCAR is convenient to anyone living in the south of Boulder. The gradient of the climb is pretty steady. You can ride it at tempo of kill yourself with the big ring. And most important is that in the winter it’s totally exposed to the sun and is dry 350 days a year. Also, it’s a dead end at the laboratory so traffic is almost non-existent.

We will finish with a couple more photos. Below we are looking at the back corner of NCAR, toward the north and the Flatirons. The final picture was taken while descending, though I stopped to take the photo of course. Safety first. 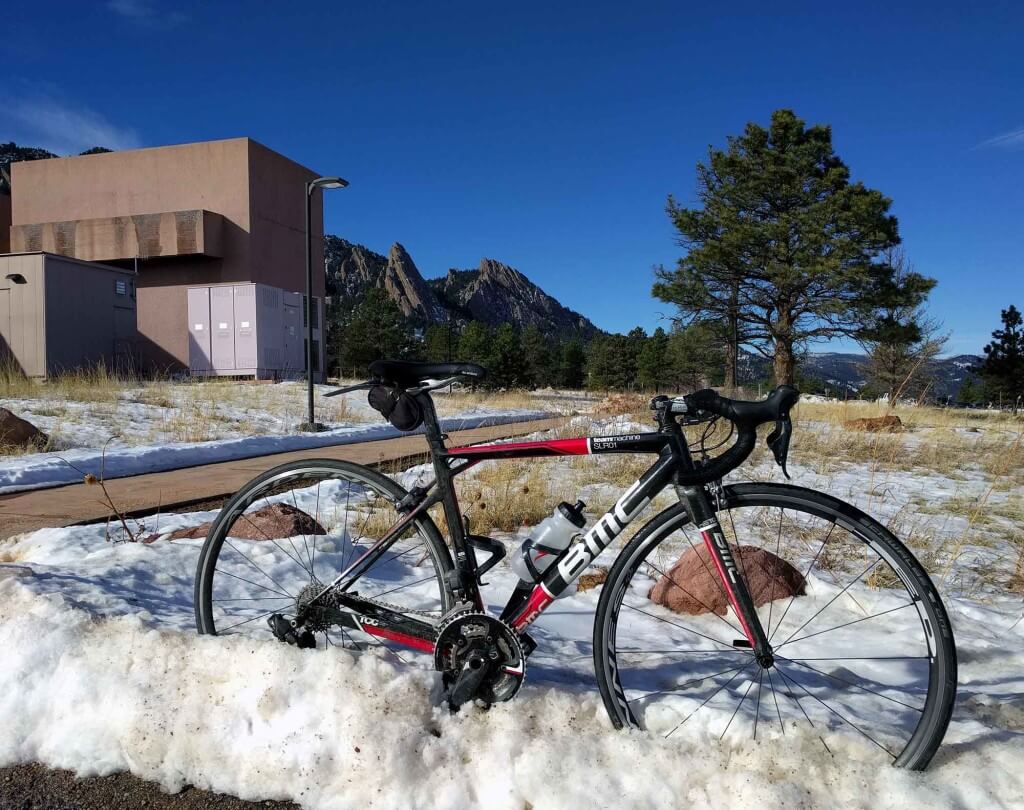 BMC with NCAR and Flatirons in the background