Col de la Forclaz is a medium mountain pass that starts in Martigny, Switzerland, and goes to France if you wish. The French border is just 25km from Martigny and Chamonix is 19km further on.

For the historically interested, the current road was built in 1827 but Martigny has a history that goes back thousands of years. Celtic tribes, the Romans and Napoleon’s army have left behind traces. A restored amphitheater, Roman thermal baths, temples and living quarters can be admired in Martigny today. 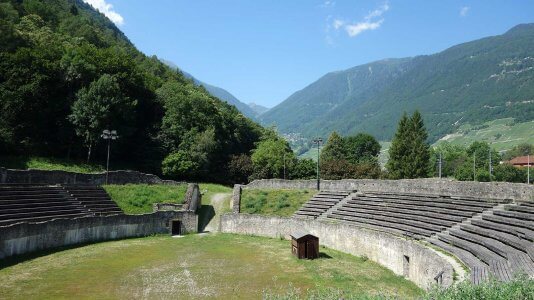 The Amphitheater was totally restored in 1978. It is used for various event today, including bullfights.

Martigny as seen while riding up the Col de la Forclaz. 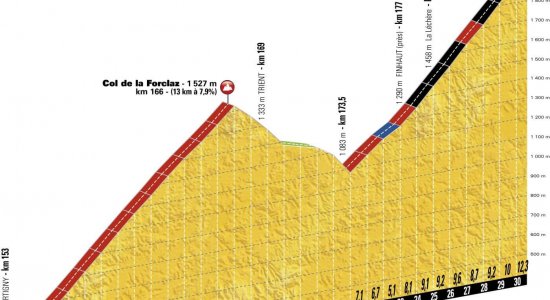 The Col de la Forclaz is pretty hard. I took a slightly more direct route than the one depicted in the climb profile, and it was steeper (and on less traveled roads). My cycling route up the Col de la Forclaz was 7.5 miles at 8% average, with an ascent 3237 ft (1000 meters). Since 8% was the average, you can bet that parts of it were quite difficult. When I connected with the main road it was easier. You are in the trees on this climb so the views are limited.

There is a restaurant and a little store at the top of the pass. I bought a coke (4 CHF) and some sunscreen (12 CHF). Expect to pay a lot in Switzerland. 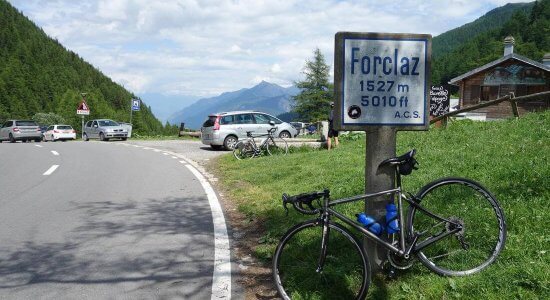 The Ritchey with the Col de la Forclaz sign at the top.

An unfortunate highlight from that stage was Shane Archbold’s crash on the descent of the Col de la Forclaz, in which he broke his bike – and his pelvis.

He is reported to have crashed going 67kph. (Photo courtesy @wcpenn)

A few hundred meters from the French border is the below Tour de France T-Rex thing. Why a dinosaur? There are fossilized dinosaur tracks in the area.  The below caption is regarding Lac d’Emosson:

Lac d’Emosson is situated at 2’400 meters of altitude, in the Vieux-Emosson region, and holds prints from reptiles dating from 240 million years ago. Over 800 prints, from several archosaurs, of which the size varies between 10 and 20 cm with a depths of 5cm, have been recorded. 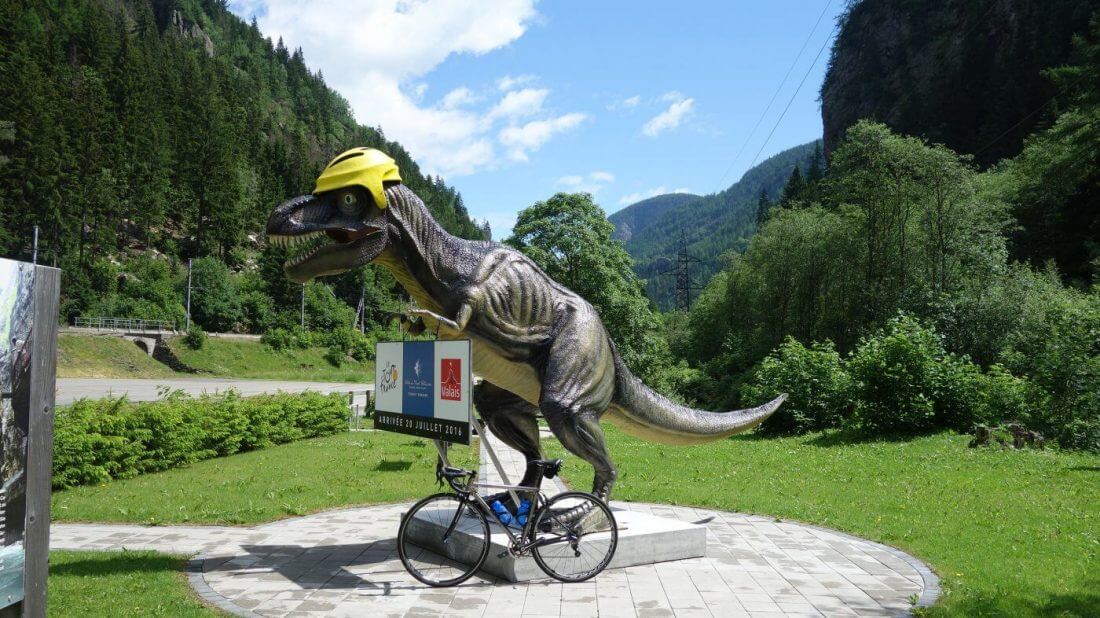 There is a dinosaur statue wearing a cycling helmet right by the Swizz/French border. It’s a publicity sign from the 2016 Tour de France.

The actual Lac d’Emosson is a hydroelectric dam. You can ride across the dam and down a paved trail along the lake for a while. There is a restaurant at the top as well.

There are some great views in a different way on these small roads. The below was just a bit path up the mountain. I didn’t see a car at all. 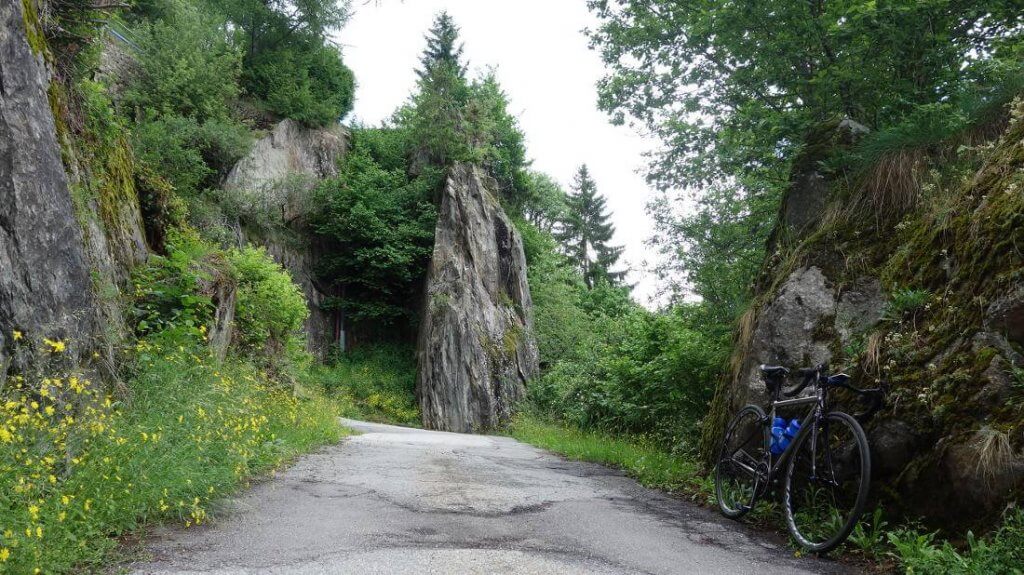 The Ritchey on a small side road up the Col de la Gueulaz.

The Lac d’Émosson goes higher than the Col de la Forclaz. Again, I took a more back road route on the lower part, for the adventure, and parts of it were very steep. For example, one section was 0.8 miles at 12%. The bonus of this is that I was on some smaller roads on the lower part before linking with the main road. I always recommend the smaller roads. 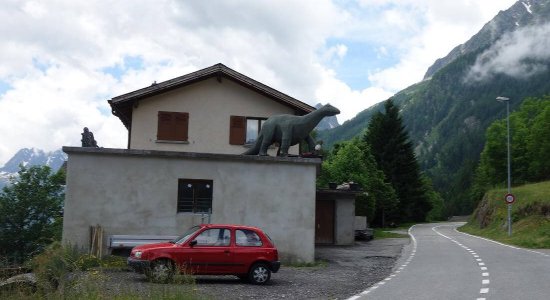 I took this because of the dinosaur on the top of the garage. 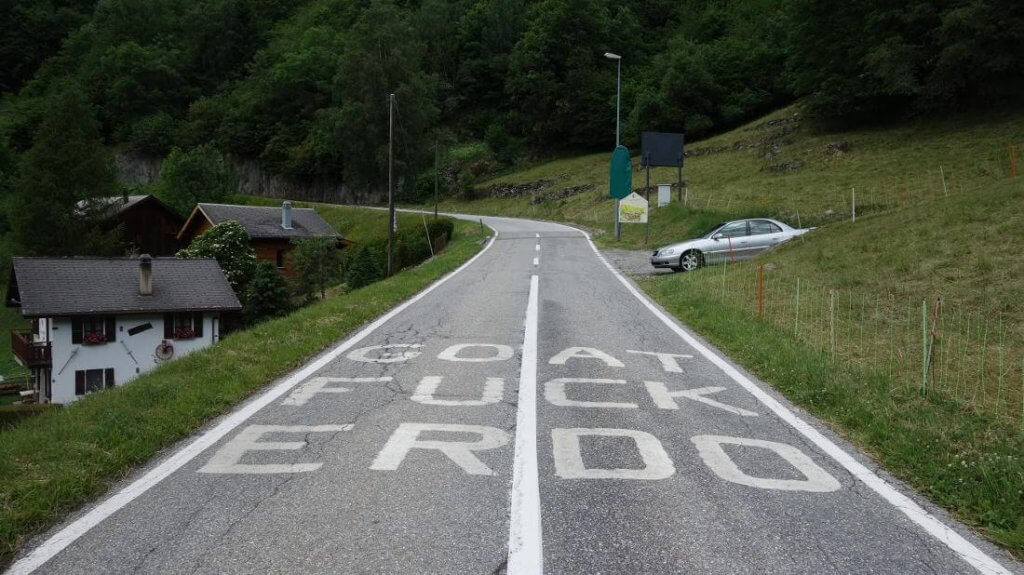 I have no idea the significance of Goat Fuck Erdo. 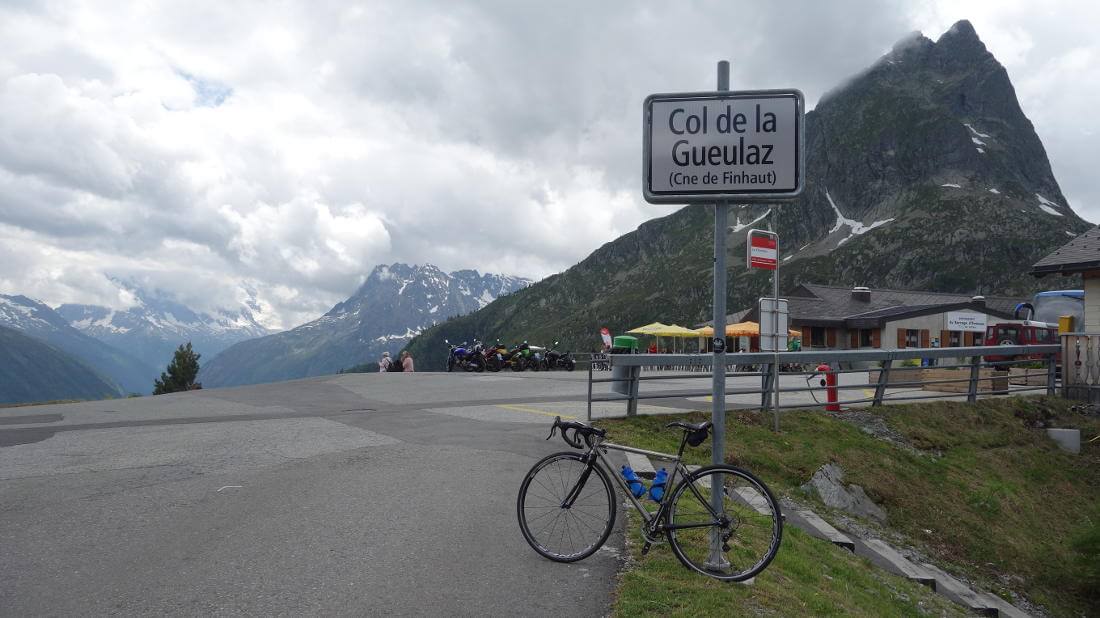 The Ritchey with sign at top of the Col de la Gueulaz.

There is a little road that continues up from the top of the col, taking you to a little chapel and a fountain. 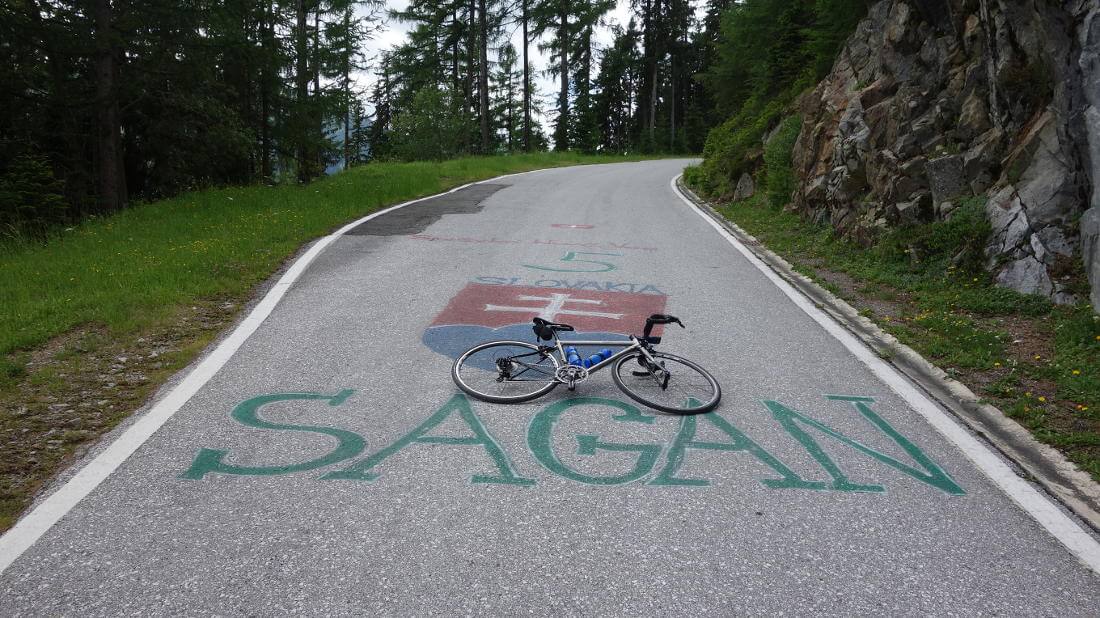 As with many climbs that feature in the Tour de France, this was chosen for logistics over rider-centric beauty. Don’t get me wrong. this is a good hard climb. While it looks good from the helicopters, compared to the other options in Switzerland this is not a climb that I would recommend if you are short on time in the area.